First thing this morning we went out and bought propane.  The last time we bought it was just over a month ago, April 8.  Gas was only about $2.65 then.  Did I say “ONLY”?  YIKES!  The gas companies have accomplished their goal.  They have made us HAPPY about $2.50 gasoline.

Anyway, propane did not increase in price.  It was the same $1.95 we paid last time.  The operator at the propane company said that a lot of companies are parking their diesel trucks and bring out the old propane vehicles or converting gas engines to propane.  A huge savings.  He even said he expected propane to be going down.

Maybe a propane conversion on our old 454 Chevy engine would save us a bunch of money.  I wonder where I could mount a large enough propane tank to go a couple hundred miles.  So, 5 miles per gallon. 200 miles means a 40 gallon tank.  How about if I mount it on the roof?

HMMmmmmmmmmm!  I just looked it up on the internet.  Propane conversions is not that expensive.  For a VW bus the guy did it for about $120.  The system allows for either propane or gasoline to be used for fuel. Just switch over to gas if you cannot find a propane source where you are.

So, if you tied such a system into a second propane tank but installed them so they worked together that would be interesting.  Just don’t run your heater too much and run out of engine fuel.  Ha! Ha!  But if you do, just switch to gasoline and go on your way.

The one article I read said that propane is cleaner burning. This means you engine runs better and last longer. It said mileage is about the same for either fuel.  I think I will research this some more.

For Mother’s Day we went to the zoo with my younger son, his wife and 2 year old daughter.  It was fun watching the two year old, Jessica.  It is also interesting.  They are teaching Jessica sign language.  She knew how to sign monkey, turtle, elephant, lion, giraffe, bird and I forget what else.  She has been signing for a long time.  Neither parent is hearing impaired, but Mom is interested in sign language.

At the zoo we were almost attacked! 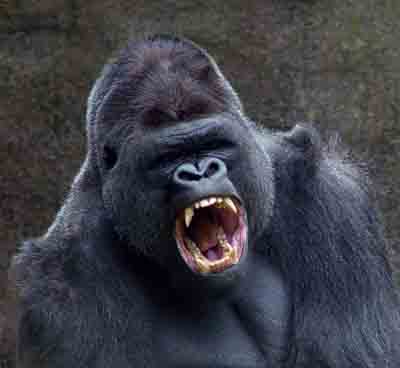 Every body is mad about gas prices

OH, OK!  The gorilla was sitting there bored and I caught him yawning.  What massive canine teeth they have.