What a great overnight trip.  Well, we left Monday about 8:00 in the morning and returned Tuesday about 6:45 p.m.  A campfire just makes the day.  Add walks on the beach and you have the next to perfect existence.  Of course, you could make that a walk by the lake or in the woods or along a desert path.  It is ALL good.

We left the campground a little after noon and moved up the coast about 1 mile or so.  Another thrilling spot.  We saw lots of dolphins cruising along, then racing for 20 feet or so and then disappearing below the surface only to leap completely out of the water.  There were also some babies maybe two feet long that would leap out of the water. 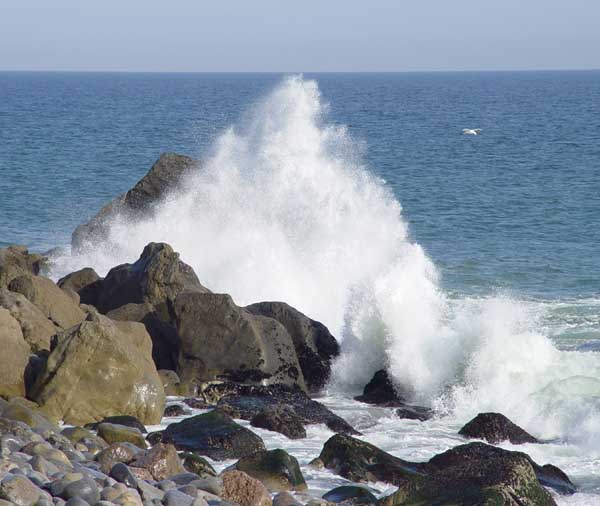 The amazing site we saw was a gray whale being escorted by a pod of dolphins.  We are pretty sure it was a gray  because of the ridges along its back.  Earlier at another spot I said, “Whale” and then whatever it was disappeared.  I  convinced myself that it was just a large dolphin.  Now I am sure it was a whale also. In the picture below the whale is on the left and part of its dolphin escort is on the right.

Not only do we see sea life, we see air life. Well, life?  OK, we are near a military air base and often see military aircraft flying overhead.  When we weren’t seeing whales, dolphins and waves we could look up and see an occasional aircraft.  These flew over yesterday. There is also a commercial airport nearby that is home to a squadron of WWII aircraft.  We see them flying by too, but not as often as the military planes.  And then, “of course”…………….. 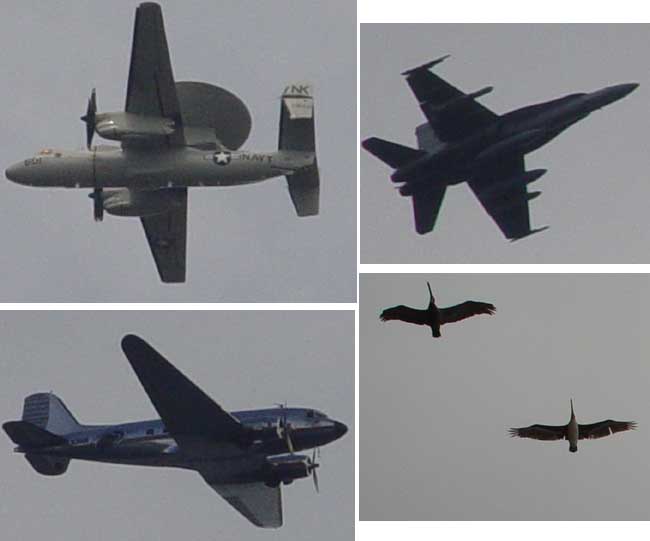 As you can tell by he pictures above, yesterday was somewhat overcast.  Some blue sky and some overcast. The pictures are fairly clear, but lose a little because of using maximum telephoto in the lens.

OH, I do need to call the mechanic and see about getting this dieseling and backfiring motorhome fixed.