Yesterday we got 16 gallons of propane for $26. When we were filled up, we headed for the beach.  There was a group of about 10 seals feeding and frolicking offshore.  At times they leaped completely out of the water.  They never did get up close to shore.

There were also a couple of dolphins swimming by not to far offshore. It is a rare occasion when we don’t see a least a couple dolphins.  Far off in the distance in the fog we could just barely see  a three masted tall ship.  Its sails were not up, so it was traveling on engine power. 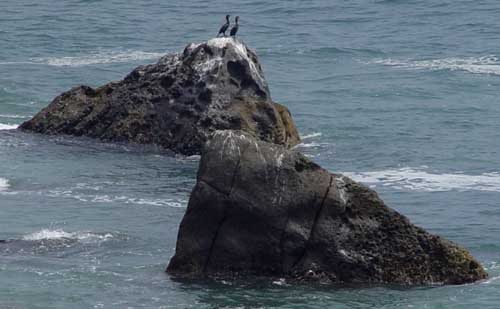 Cormorants on a rock

Of course a tall ship, dolphins and seals weren’t the highlight of the day.  About 11 o’clock Poky started barking up a storm as a woman came up to our door.  She was in her mid-thirties and very agitated about something.  She threw here purse and bag to the ground.  As soon as  I asked her what was wrong it became obvious that she was under the influence of something.  Not much choice but to talk to her since she was at our door.  I sat down on the inside step and as I talked she calmed down.  I really don’t know what she was saying as her speech was slurred.  I did understand when she asked for some TP. Sharon gave her a some Kleenex. She then pulled down her shorts and squatted by our steps and relieved herself. 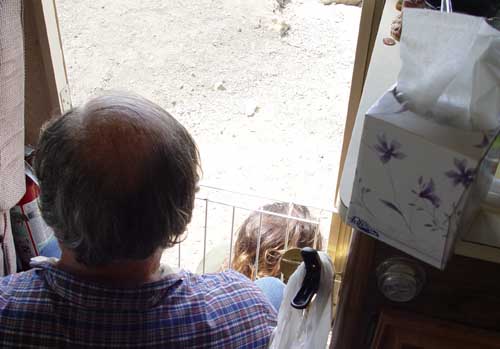 Do you see the “fence” between the woman and I?  That is just a rack we put in the doorway to keep Poky from getting our and chasing a squirrel or in this case “attacking” this poor woman. It’s probably a good thing it was there or she might have just walked in.

Next she sat on our steps and talked incoherently to herself.  Sharon and I decided that for her safety we would call 911.  About 20 minutes later a California Highway Patrol Officer arrived.  He talked to her, handcuffed her and took her away in the front seat of the patrol car.  I’m not sure if she was handcuffed in the patrol car or not since she was allowed to ride up front. 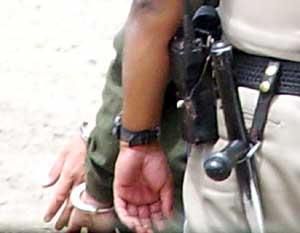 She was not with anyone.  She didn’t have a car anywhere near. There we no other people around.  She may have been dropped off by someone and left to fend for herself.  We didn’t see any choice but to call for help since she could go over the edge onto the rocks below, out onto the street or be assaulted because of her condition.

Have you ever listened to waves on rocks or fast moving water actually moving rocks along on top of each other?  It is a wonderful sound to hear the rocks being tumble across each other.