Today between 8 and 9 a.m. they tried to pull the Irving Johnson off of the beach. They used two tugs today. One was the primary pull tug and the other had a lighter line to help stabilize the pull. All was going great and the ship was pulled slightly forward and at the same time upright. It was great to see them making progress 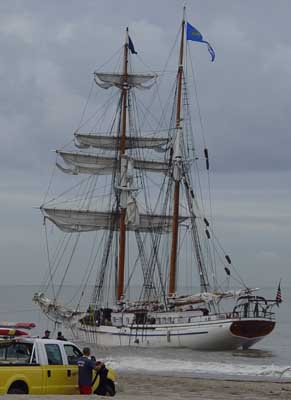 When they got it upright, they needed to head the bow out to sea and doing so tipped the ship onto its other side. Now waves were coming on deck and unfortunately filled the ship with water and making further progress next to impossible. Think of a cup tipped on its side in a basin of water, the farther it tips, the more it fills with water. This is what happened with the Irving Johnson this morning. 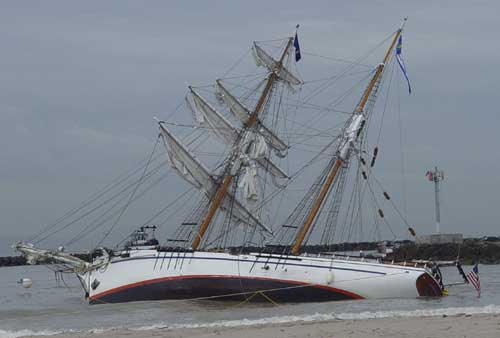 They were able to aim her bow out a little more toward open ocean, but the tide was well past the high tide mark and it was very slow going.

For now they have quit. There is a tug offshore keeping tension on the tow line to keep the progress they already made steady. There are light lines running to treaded tractors on the beach the keep tension from shore.

Tonight at high tide, between 8 and 9 p.m. they will try again. They were going to wait until tomorrow morning, but decided to give it another try tonight.

I have taken over 700 pictures of this event. I am giving all of the pictures to the crew and the owners including a copyright release to allow them to use them in any manner they choose. I am not a professional photographer, but I am sure I have a few nice pictures from a variety of angles that will be of interest to them.

Today started out sunny with light clouds but has turned cloudy and they are forecasting rain. That will not help with the ship rescue. Sharon is out in the motorhome right now browning some hamburger meat for chili tonight. One of my favorite rainy day meals is chili beans. Those dark clouds do look like we are in for more rain.