Find out a little bit
about the authors of this site 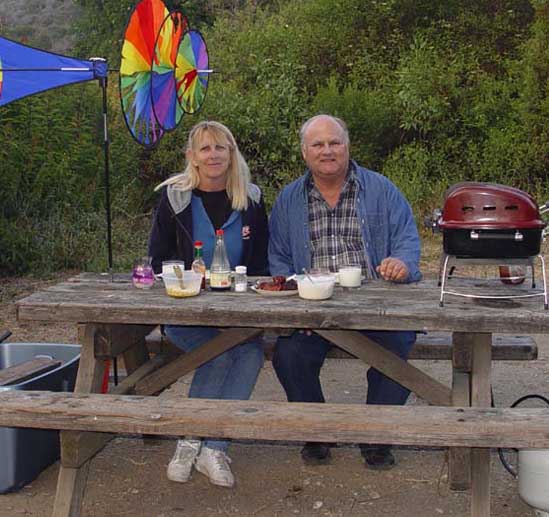 Hi, I thought you might like to know who is behind this site and the RV Living Blog. We are a husband and wife team, Bob and Sharon. I, Bob, do most of the writing. Sharon does research and helps with the less technical things that keep this site going.

Bob was born in Southern California, but after his parents divorced when he was 3, he became an Army Brat and moved around a lot, until he to joined the Army for more moving.

Sharon was born and raised and raised in Southern California and finally got married there too. Sharon would LOVE to see the places Bob has been. The East Coast of the United States, New Mexico and Carlsbad Caverns, Okinawa, Taiwan, Hong Kong, Japan, Korea and stops along the way. Those stops include the Philippines, Guam and Hawaii. Sharon and I did go to Hawaii for a week.

We were married August 12, 1966 and have been happily married for 39 years. We are best friends and still in love. We like walking and holding hands and enjoy being together day and night. Since we work for ourselves, we work together and this suits us just fine.

We once owned a tent trailer, but only used it about 3 times. That lack of use was a mistake, but that's what we do when we don't realize what we have and don't make time for things.

Our introduction to actual RVing came in March 2004 when we bought a 1988 Fleetwood Bounder, 34 foot motorhome. Due to problems we didn't get the Bounder from the dealer until a month later. Our $10,000 investment in an RV was well worth it. We went camping about 20 times in 2004. This year, 2005, so far we have been 19 times, with 3 /12 months to go. We have reservations for 3 trips and I'm sure there will be a few more in between. We really love RVing.

RVing has become such and important part of our lives that we have decided we want to go full-timing in an RV for at least 2 years. We would like to see our Country, Canada and maybe parts of Mexico. It would be nice to fill one of those "where you have traveled" maps with all 49 states -- I don't think we will be able to RV to Hawaii.

Since 1998 we have made our living selling on Ebay. It has been great and it has been slow. It has moved us from the HOT inland area, 60 miles east to the cool coast. Ebay took us to living 5 houses from the beach. We have had slow, tough times too. We just weather those and move on.

Right now we are learning how to generate income by having websites like this one. There are advertisers and affiliate programs that allow you earn a living wage from websites. I believe we will be able to do this by the time we plan on going full-timing in January of 2007. We would like to go sooner, but we would have to do some real hustling and hard work to go before 2007 -- who knows, maybe we could.

Bookmark us now. Make us one of your Favorites.