We Failed Smog In Our Work Van

Yesterday we had our 1999 GMC cargo van smogged. It failed. It passed emissions. It does not pollute the air, but it has a sensor that failed.  Today the mechanic gets the part to repair it. The total will be over $500 IF the new sensor fixes the problem.  IF, I hate that word when mechanics say it.  Here in California,  a smog test station CANNOT do repair work too.  You are give a list of 30 or so local mechanics and you choose where to go to get the problem fixed.  I chose a place recommended to me by two different people.  They say he is good and he is honest.

I have heard that before having an engine smogged, you should drive the vehicle for a while to warm it up.  Supposedly a warm engine passes better than a cold one.  Can you guess where we went to warm it up?  YEP! The beach.  Just are we arrived I was looking out at the surfers and waves. One surfer was on a wave as it curled and I saw a long dark object going parallel with the wave. It was right in the curl of the wave.  I thought, “SHARK”!  That is exactly what it looked like.  A dark torpedo in the water.

The surfer ended his run and a few yards behind him a dolphin surfaced.  Dolphins love to surf also.  Farther out there was a small pod of dolphins.  I guess maybe a half dozen of them.

Poky loves the word, “Go”.  Add, “Beach” to “Go” and he’s excited beyond words.  When we get close to the beach he sits up and starts a low whining sound.  He knows what the beach means. 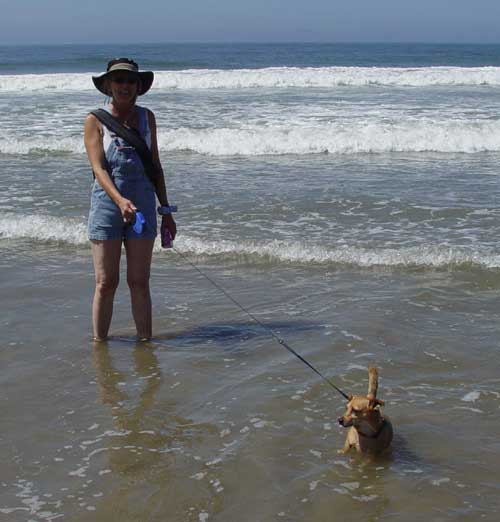 Poky in “deep water”.  Up to his chest

One of the birds we usually see on the beach is the sandpiper.  It gets it name from sticking its long beak down into the sand probing for delicacies to eat. 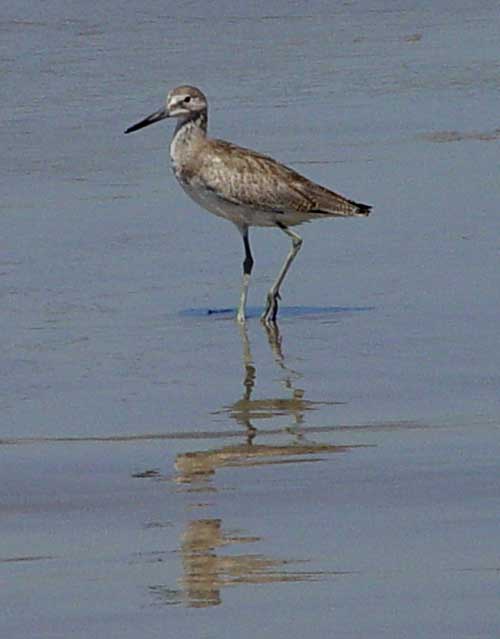