Our Anninversary And Forrest Gump

What a great day we had yesterday on our 39th Wedding Anniversary. But, let me go back a little first. Last weekend we stopped at a garage sale and along with the glider airplane we bought an old VHS tape copy of Forrest Gump.  We had seen the movie before and enjoyed it.  “Life is like a box of chocolates. You never know what your are going to get”.  We watched it Thursday evening.  It was just as good the second time as it was the first time.

Yesterday we got up early so we would get to the aquarium when it opened at 9.  I talked to the new guy at the business next door for a while. We got the the aquarium at 9:12. Pretty good timing. The aquarium is VERY BUSY with hundreds of young day care children during the week.  It is noisy, but a lot of fun anyway.  The kids are more amazed at the fish than we are. 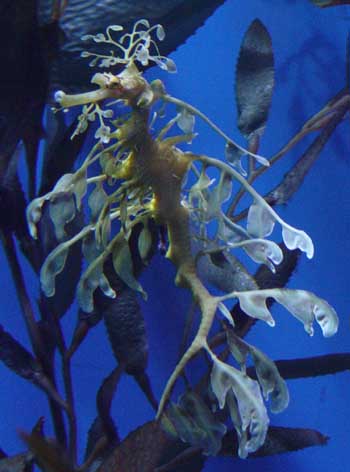 About 11 o’clock they are announcing the whale exhibit and have a siren in the background.  Well the siren is actually the building fire alarm going off.  “Would you please exit the building”.  There was no sign of a fire and everyone exited in an orderly manner. Once outside, Sharon and I walked along the harbor looking at the tour boats and watching terns diving for fish. 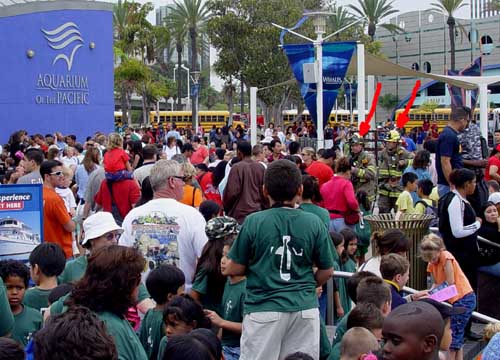 Firemen coming to check thins out.  Lots of kids.

At about 11:30 we decided on an early lunch. We were going to eat in the aquarium cafe, but that was out, so we ate at “Bubba Gump’s Shrimp Company”.  Did you see the movie, “Forrest Gump”. That is the name of the shrimp company he created.  The restaurant is based around the movie, with props and sayings from the movie on the walls.  The food is good and fun. 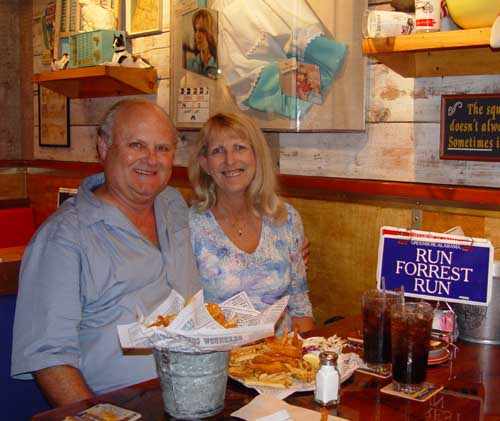 Lunch in a bucket.

What a coincidence. We see the movie the night before and eat at Bubba Gump’s the next day.  The waitress was surprised when we got all of her questions about the movie correct. We did confess we had seen it the night before.  She took our picture and when lunch was over she came back with a complimentary dish of chocolate Sunday and other servers and sang us their anniversary song.  What a wonderful lunch.

By then the aquarium and fire department had figured out that is was some sort of false alarm and let people back into the aquarium.  We looked at the exhibits a little while and decided to go out on a 45 minute harbor tour about 3:15.  It was relaxing and interesting. We stood at the bow of the boat the whole trip.  We like that position on tour boats and whale watching boats. 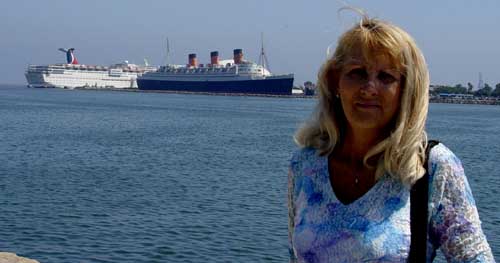 When we got back we went back into the aquarium which stays open until 9 on Fridays.  The have a tropical bird exhibit you can walk into and feed the small parrot sized Lorikeets.  They drink a liquid from a tiny cup you can buy for a dollar.  Our morning visit to the birds was fun, but the birds were slow to hop on your arm and drink the nectar from the cup. In the evening the birds would hop on your arm even if you didn’t have food for them.  They would fly by and land on the person next to you.  One guy had about 5 birds on his arms, shoulders and backpack.

I had a bird land on me.  Have you ever done a strip show in public?  Well, this bird was determined that I do one.  It knew how to unbutton shirt buttons.  It had all of my shirt buttons unbuttoned, and as soon as I would button them up, it would proceed to unbutton them.  It was so funny.  I had a crowd watching us buttoning and unbuttoning my shirt. This went on for at least fifteen minutes. 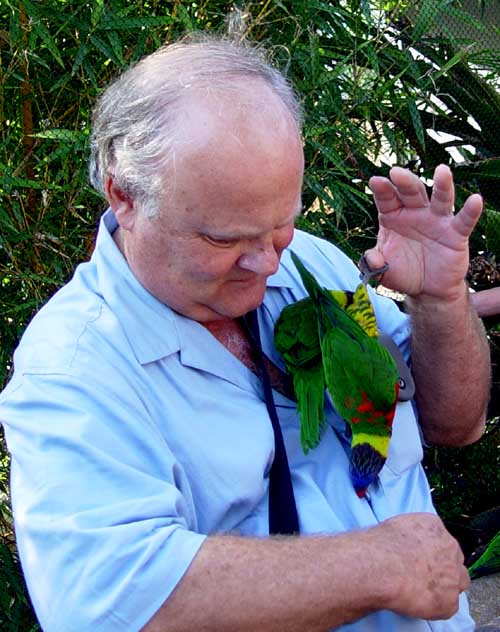 When one wasn’t enough, it got the help of a friend

After the aquarium we went over to the shops in the harbor and had a banana split for dinner.  What a great banana split. You chose the three flavors of ice cream and then chose your three toppings.  A little different than the traditional banana split where you have no choice.

The jelly fish were beautiful and wonderful to watch.

Jelly fish: Left one the size of a dinner plate. Right one smaller than your fist.

We are getting ready to leave right now. I will plug in some pictures later today, maybe this evening.

While we were on the harbor cruise we saw the tall ships that we visited in our harbor only days before.  This time they were far in the distance and only recognizable by their sails.